Literature comes to life in the performances and scholarship of John Dennis Anderson, an accomplished oral interpreter who presents biographical performances of America’s greatest authors. As a Professor Emeritus at Emerson College, Anderson has taught and continues to publish in the academic field of performance studies and serves as a consultant on living history performance.

Since 1994, Anderson has been developing and presenting living history (or Chautauqua) performances as the authors Henry James, William Faulkner, Robert Frost, Washington Irving, Ernest Hemingway, Louis Bromfield, Henry Beston, and Lynn Riggs. These performances consist of lectures in character followed by answering questions first in character and then out. He has performed in over a dozen states, in venues from the Boston Athenaeum to the Seattle Public Library. These performances combine scholarly and creative elements that showcase a tradition of oral performance of literature and speech communication that harkens back to the Lyceum and Chautauqua movements of the nineteenth century.

John Dennis Anderson is available for performances (and to consult in developing humanities programs) for libraries, museums, historical societies, colleges, universities, and community and educational organizations. His lively, engaging performances are entertaining as well as scholarly and informative. 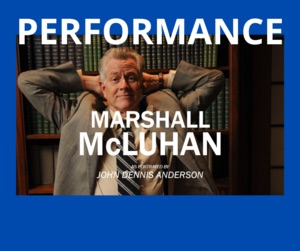 John Dennis Anderson will present Marshall McLuhan online on June 10 for the Oklahoma Chautauqua from Tulsa.

John Dennis Anderson's short play "On the Beach with Beston" received the First Prize in the Blue Institute's 2021 Words on Water Festival.